From smart lights to wearable airbags, the best cycling tech to keep you safe

In an ideal world, cycling would be far a more common method of everday urban and suburban commuting than cars. However, for a few reasons – access to safe cycle routes, safety issues on the roads, or maybe just the fact that the weather in

is miserable a good portion of the year – commuters haven’t turned to two wheels in the sort of numbers many would have hoped.

Help may be at hand in the form of a growing number of gadgets and tech features to keep cyclists safe. Tech has found its way into most past times, and cycling is no exception. And while some of it is “nice to have” rather than “must have”, there are a few things that could help make your bike journeys a bit safer.

Probably one of the most important things you can invest in as a cyclist, good lights can mean the difference between you being seen in bad light, and, well, not. You can still buy regular lights, but technology has made it all a bit smarter, allowing you to control the brightness according to the road conditions, building in crash alerts and even warning you when your bike moves but you aren’t with it.

Belfast company See.Sense has been making its smart bike lights for a couple of years, backed by a successful crowdfunding campaign or two. The company has a couple of products to offer including its Icon lights.

They may look like a normal set of lights, but See.Sense’s Ace  is much more than a few blinkers attached to your bike. It’s much smarter than that, using information from your surroundings to gauge when you are most at risk, making your lights shine brighter or faster to make sure you can be seen. It’s all thanks to a bit of artificial intelligence. 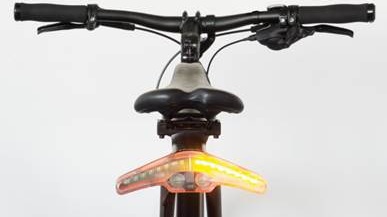 Another option is Blinkers (
www.blinkers.bike
), which as the name suggests gives cyclists a very obvious way of signalling their intention to turn, a rear light that gets visibly redder when you brake, and a laser light that projects a half circle on the ground to indicate where the cyclist is and how much space they need.

It’s all controlled through a remote that attaches to your handlebars, and works on the idea that the more visible you are, the less likely you are to hear the excuse “I didn’t notice you” when you end up in a one-on-one with a car.

They charge through a USB and you get about 20 hours out of a single charge – enough for a few bike trips at any rate. They’re not as compact as other bike lights, which may be an issue if you like to remove them and take them with you to guard against theft, but it’s a small price to pay.

There are plenty of devices out there that will help you find your way when you are out and about on the roads. It really depends on what you want: an all singing, all dancing device that measures everything from your speed and elevation to exactly where you are at any given time, or something that will just point you in the right direction. 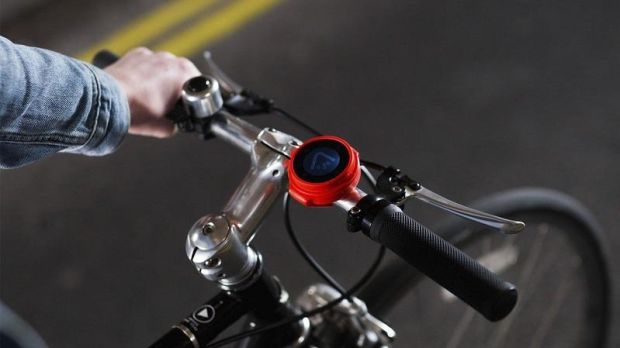 If simplicity is what you are after, then Beeline (
beeline.co
) is a good bet. It has a simple follow-the-arrow interface and was designed with cyclists in mind. It links up with a smartphone app so you can set your destination, and then you simply have to attach it to your handlebars before you head off. It ticks a couple of boxes: a sharp backlit display, a clean interface that shows the smart compass, battery life, a speedometer and a clock, and it will take a bit of abuse in the elements. Battery life is about 30 hours, and it charges over USB, so if you ever get stuck you can simply strap a power pack somewhere to your bike and keep on going.Garmin
offers something a little more complex. The navigation expert has a range of devices for cyclists – not counting their smartwatches and activity trackers that will help monitor your actual exercise sessions – that cover everything from the simpler, smaller devices to the full on cycling computers that do everything except massage your legs after a major bike ride. 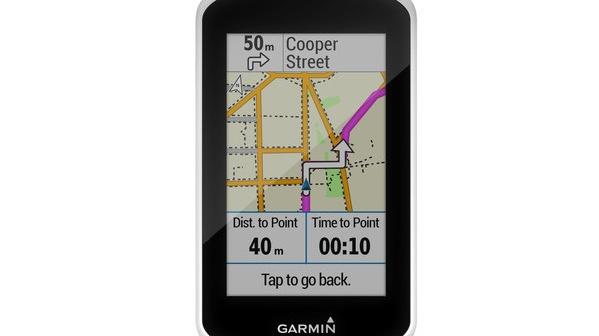 , which will track your progress but also allow you to find new routes through Garmin Cycle Map, which will show you what other paths other cyclists like, and give you turn-by-turn navigation. It can also link up with your smartphone for extra features such as automatic incident detection, which sends your location to an emergency contact if you have a collision, or with other safety devices such as radar and smart bike lights. If you are a bit more invested in your cycling, the Edge 520 or 1030 might be more suitable, or move away from Garmin altogether and invest in a

Wahoo Elemnt Bolt Safety Cyclists are more vulnerable than most other road users, so protective gear of some sort is probably in most cyclists’ kit.

There is a debate about bike helmets. On one hand, there is the recent findings from Australian researchers that say wearing one will reduce the likelihood of a serious head injury by up to 70 per cent. On the other, there is research that claims wearing a helmet makes you more likely to indulge in risky moves, and puts people off cycling.

You may not agree with laws making the wearing of cycling helmets compulsory, but

gives you an additional reason to wear one: it has lights built in to make you visible to passing motorists. There are 48 LEDs – 38 in the back, 10 bright white in the front – and there is a wireless remote that you can use to activate your turn signals. A test feature also uses the accelerometer to detect when you are slowing down, triggering a warning signal on the helmet.

If you are adamant about cycling helmets not preventing head injuries, maybe this device will get a bit more support; the
Hovding
is essentially a wearable airbag that will detect falls and immediately inflate, protecting the cyclist’s neck and head with an air cushion. It claims to be the world’s safest bike helmet, estimating it is eight times safer than a regular helmet.

It’s not cheap at €299 for the initial Hovding, and €135 for a replacement if you have an accident. But it’s a small price to pay to protect against a potentially life-changing head injury.

There are other ways to improve your safety. Using your morning commute to catch up on podcasts or zoning out with music is something you can take for granted in a car, but as a cyclist, it’s not recommended. You need to be able to hear approaching traffic or have your attention on potential road hazards, and bone conduction headphones can be a solution. No, it’s not an elaborate form of torture – or maybe it is, depending on your taste in music – it’s a form of technology that allows you to hear sound through vibrating the bones in your face. That means you can hear music, but still have your ears free. The headphones sit over your ears touching your cheekbones (in this particular case), so you can listen to music but still be aware of your surroundings. 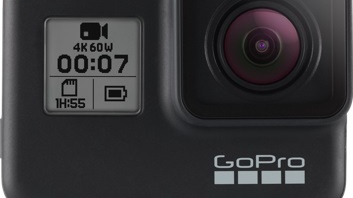 If anything does happen though, it can help to have the evidence to hand. More and more cyclists are wearing body- or bike-mounted cameras on the streets of Irish cities.

GoPro has a series of cameras that are weatherproof and reasonably robust, and the

, while an investment, gives some great video. There are other options too, with 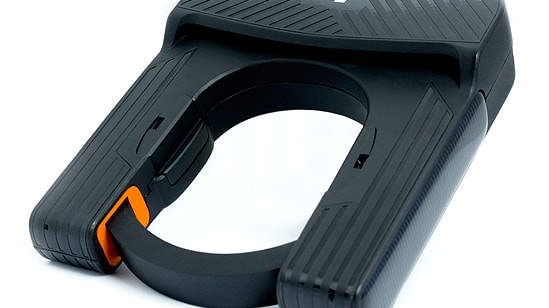 The Deeper Lock Pro+ has motion sensors that trigger an alarm when the lock is tampered with, and GPS to track the thief should they actually make off with the bike

Finally, securing the bike itself is an important thing. You don’t need a smart lock as such, but the

, currently crowdfunding on Kickstarter, has motion sensors that trigger an alarm when the lock is tampered with, and GPS to track the thief should they actually make off with the bike.

If you want something a little more subtle, the

is a GPS unit that hides inside your bike frame and connects to an app so you can track it. The idea is that thieves won’t realise it’s there until it’s too late. You have to pay a monthly fee after the first two years, but it’s only €3 to keep the GPS connected.

This is is a syndicated post. Read the original at www.irishtimes.com