Gogoro, the Taiwanese electric vehicle company, revealed its newest vehicle today, a lightweight scooter designed for people who want something smaller than one of the company’s Smartscooter mopeds, but more powerful than an electric bike. Called the Viva, the scooter can run for 85 kilometers on one of Gogoro’s swappable batteries, which are charged at the same stations as its Smartscooters. 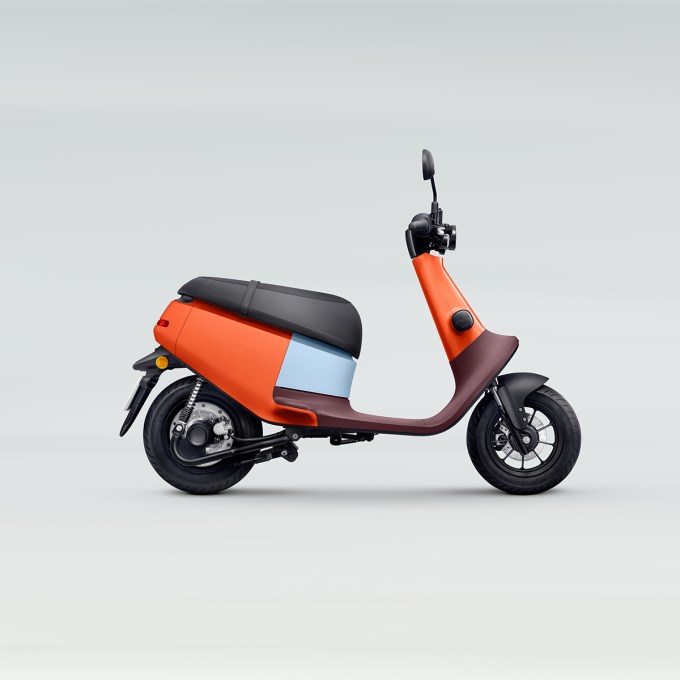 Horace Luke, co-founder and CEO of Gogoro, tells TechCruch that the Viva was created as an environmentally friendly alternative to 50cc to 100cc gas scooters. It will be available starting in October, launching first in Taiwan next year before being released in some international markets.

Made from recyclable scratch-proof solid-core polypropylene and available in five color combinations, the Viva weighs 80 kilograms and has up to 21 liters of storage. It will retail at USD $1,800, with about 100 optional accessories available, including baskets and racks.

As in many other Asian cities, mopeds are popular in Taiwan and serve as the primary vehicle for many drivers, transporting multiple passengers and deliveries. Luke says Gogoro’s scooters now account for 95% of the country’s electric vehicle market share and about 17% of all new vehicles sold in Taiwan, including gas ones.

Viva was created to attract customers who don’t want to deal with the costs, including maintenance visits and parking, of owning a bigger moped.

“The Viva is aimed toward the population going no more than 5 kilometers a day, who don’t want to worry about scratches, cost of ownership, having to take it to the shop for maintenance or parking,” he adds. “We have 17% market share and now the question is how do you get to 25% or 35% market share?”

Like Gogoro’s mopeds, the Viva is also connected to the company’s iQ system, which lets users unlock their vehicles and monitor mileage and maintenance with a smartphone app. With Taiwanese government subsidies for electric vehicles, it will cost NTD $25,980 (about USD $837), making it competitive with the pricing of high-end electric bikes. Gogoro will also offer two years of free maintenance for Vivas sold in Taiwan.

Gogoro has now sold more than 200,000 Smartscooters and is present in international markets, including the European Union (through a partnership with scooter-sharing service Coup), South Korea (where it recently launched electric scooters designed for delivery drivers), and Japan. It also runs a mobility platform designed to be a white-label solution for ridesharing companies.