Electric scooter and bike-share company Lime is not giving up on San Francisco. This afternoon, Lime plans to protest on the steps of SF City Hall to petition the city’s scooter selection process.

“We are calling the SFMTA to expand equitable transportation options throughout the City by allowing more choice and greater options, by requiring a scalable low-income program that ensures equal access to scooters and other mobility options, and by working with experienced operators with a proven track record of success,” Lime wrote in its petition. “The SFMTA scooter selection process resulted in an extremely small service area as well as an absence of robust equity options. If you are as frustrated as we are, come let your voice be heard.”

In the #BayArea? Frustrated with the SFMTA scooter selection? Join us on the steps of #SanFrancisco City Hall at 1:00pm to deliver thousands of petitions from people from all over San Francisco and let your voice be heard! https://t.co/Rbx2UGtMRo

The SFMTA has previously said it was “confident” it picked the right companies. When the San Francisco Municipal Transportation Agency selected Skip and Scoot as the only two electric scooter companies permitted to operate in the city, competitor Lime took legal steps to attempt to prevent Skip and Scoot from deploying. A San Francisco judge, however, promptly denied Lime’s request for a temporary restraining order.

Meanwhile, Lime had officially appealed the SFMTA’s decision. Other companies, including Spin and Uber’s JUMP, have also appealed the scooter selection process.

Earlier today, the SFMTA heard Lime’s case. It’s not clear how it went, but I’ve reached out to Lime and the SFMTA to learn more. Based on Lime’s actions, it seems as if it didn’t work out very well for the company.

Update 1:57PM PT: About 30 or so people showed up to Lime’s protest. It was relatively uneventful, but the gist is that Lime is seeking community support to petition the SFMTA and convince the agency to allow Lime to operate its electric scooters in the city. 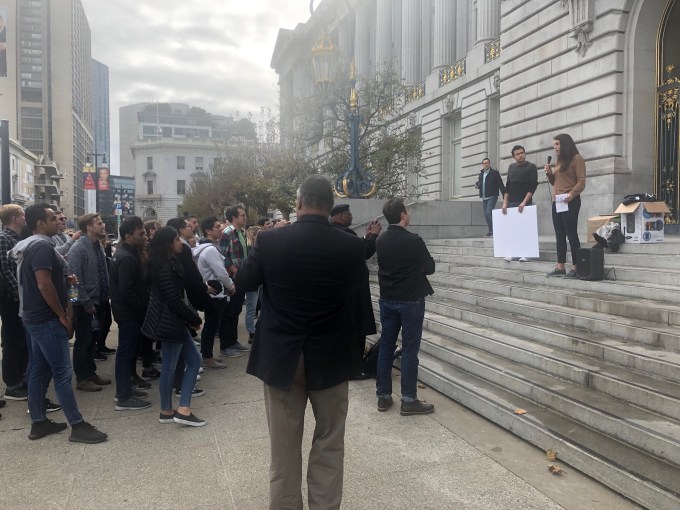 Electric scooters are back in SF